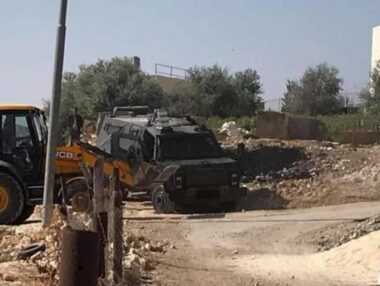 Hasan Breijiyya, the head of the Bethlehem office of the Wall & Colonization Resistance Commission, stated that several Israeli army jeeps, and two bulldozers, invaded the Zawahra neighborhood in the town, and demolished an under-construction home, belonging to Oleyyan Salah Zawahra.

It is worth mentioning that Zawahra only received the demolition order a few days ago, and was preparing to file an appeal.

In addition, the soldiers invaded Harmala village, east of Bethlehem, and demolished an under-construction home, owned by Mohammad Sbeih.

Breijiyya said that the army claims the homes were not licensed by the so-called “Civil Administration Office,” of the illegal Israeli occupation, although they received permits by the local councils.

On Wednesday at dawn, the soldiers abducted two Palestinians, including the wife of a political prisoner, in the Jenin governorate, in the northern part of the occupied West Bank.

Also at dawn, the soldiers shot a young Palestinian man, and abducted another, in two separate incidents in the central West Bank city of Ramallah.

On Tuesday night, the soldiers killed a Palestinian man, identified as Raed Yousef Rashed Jadallah, 39, in the western area of Beit Ur at-Tahta, west of Ramallah, after the army attacked Palestinian workers in a crossing area of the Annexation Wall.