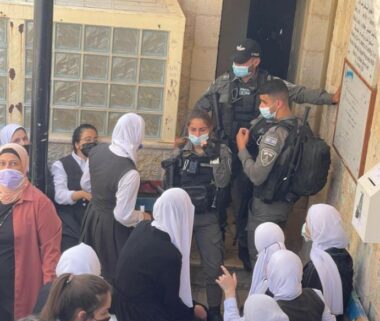 The Wadi Hilweh Information Center In Silwan (Silwanic) stated that dozens of soldiers, border police officers internal security agents broke into the school, under the pretext that one of its rooms is used as an office for the Palestinian Education Ministry. Silwanic added that dozens of students were in the school, including its yards when the soldiers surrounded and invaded it.

During the invasion, the army abducted the school principal, and several administrative employees, in addition to summoning many other employees for interrogation, and confiscating dozens of files. The Palestinian Health Ministry denounced the attack, and described it as a serious violation of the basic Palestinian rights of education, especially since Israel is constantly trying to change the curriculum in Palestinian schools in occupied Jerusalem, in addition to the frequent invasions into various educational facilities.

The Ministry called on various international legal and human rights organizations to pressure Israel into ending its escalating violations against the student and the education facilities.