Soldiers Injure Many Palestinians In Gaza 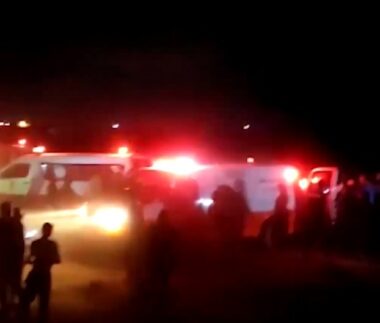 Israeli soldiers injured, Wednesday, many Palestinians during a procession on Palestinian lands near the perimeter fence, east of Rafah, in the southern part of the Gaza Strip.

Media sources said the soldiers, stationed in their fortified positions and behind dunes across the fence, fired many live rounds, rubber-coated steel bullets, gas bombs, and concussion grenades at the protesters.

They added that a young man was shot with rubber-coated steel bullets in the chest, and suffered moderate wounds.

Another young man was shot with a high-velocity gas bomb in the pelvis, and a third was shot in the thigh.

Many Palestinians also suffered the effects of tear gas inhalation, in addition to various cuts and bruises.

It is worth mentioning that the soldiers also fired many flares, in addition to using many surveillance drones.

The same day, according to the Palestinian Ministry of Health, Israeli soldiers shot and injured 41 Palestinian civilians, with live rounds and tear gas canisters, including a twelve-year-old child who was shot in the head. The child, identified as Omar Hasan Abu an-Neel, remained in critical condition until he succumbed to his serious wounds on August 28th.

In related news, Israeli soldiers killed, on Tuesday at night, a Palestinian man, identified as Raed Yousef Rashed Jadallah, 39, in the western area of Beit Ur at-Tahta, west of the central West Bank city of Ramallah, after the army attacked Palestinian workers in a crossing area of the Annexation Wall.