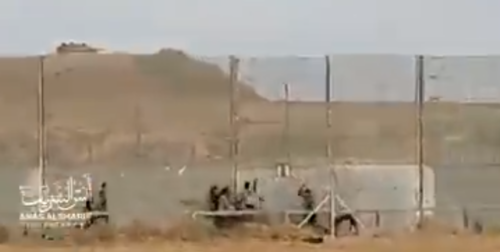 An Israeli sniper died on Monday, August 30th, after having sustained a critical gunshot injury, along the border wall with Gaza nine days earlier.

Barel Hadaria Shmueli, 21, an Israeli Border Police officer from Be’er Ya’akov, was on duty as a sniper, shooting unarmed Palestinians, including children, who were gathered near the border wall.

The Israeli media stated that the soldier sustained a life threatening gunshot wound to the head, and despite undergoing emergency surgery, he remained on a ventilator at Soroka Medical Center in critical condition, until he was pronounced dead.

The same day, according to the Palestinian Ministry of Health, Israeli soldiers shot and injured 41 Palestinian civilians, with live rounds and teargas canisters, including a twelve-year-old child who was shot in the head. The child, identified as Omar Hasan Abu an-Neel, 12, remained in critical condition until he succumbed to his serious wounds on August 28th.

According to the Palestinian Ministry of Health in Gaza, 14 people were shot and wounded, adding that 5 were shot with live rounds, suffering moderate injuries; 2 were shot with rubber-coated steel rounds; and 7 were shot with teargas canisters.

Quds Press’s correspondent said that the soldiers, stationed along the security fence stood behind earth mounds, far away from the protesters, which shows that there was no reason for the use of live rounds.