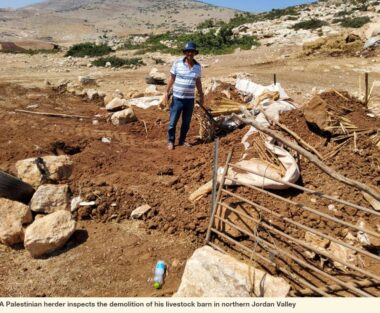 The forces also demolished another 60-square-meter tent used as a livestock barn belonging to Adel al-Hroub.

The tents were torn down purportedly for being built without construction licenses.

The soldiers later declared the community as a closed military zone.

Under international law, driving residents of an occupied territory from their homes is considered forcible transfer of protected persons, which constitutes a war crime. But residents of Palestinian communities in the Jordan Valley are no strangers to such disruptive Israeli policies.

In violation of international law, the Israeli military not only temporarily displaces the communities on a regular basis, but also confiscates their farmlands, demolishes their homes and infrastructure from time to time.