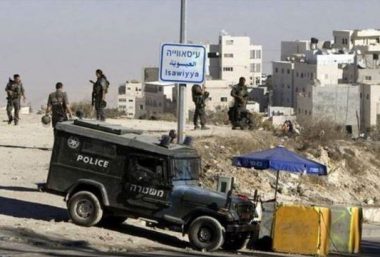 Israeli soldiers invaded, on Tuesday at dawn, the town of al-‘Isawiyya, in occupied Jerusalem, violently searched and ransacked homes, and abducted five Palestinians, including three siblings.

The soldiers conducted several invasions into the town, overnight and during dawn hours, Tuesday, and clashed with dozens of youngsters, who hurled stones and empty bottles on them, while the soldiers fired rubber-coated steel bullets and gas bombs.

The soldiers also removed a tent that was installed by the locals who were preparing to celebrate the release of detainee Mohammad Zeidan, who is scheduled to be freed today, after spending fifteen years in Israeli prisons.

The soldiers wanted to stop the celebrations, and removed Palestinian flags, posters and pictures of the detainee, and all signs welcoming him back home, in addition to invading his father’s home, and threatening to abduct him should he and the locals celebrate his son’s release.

During the invasion, the soldiers abducted Mohammad Kayed Mahmoud, Shahin Oleyyan, and three siblings, identified as Samer, Mohannad and Sami Anwar Obeid; they were moved to the al-Maskobiyya detention and interrogation center, in west Jerusalem.