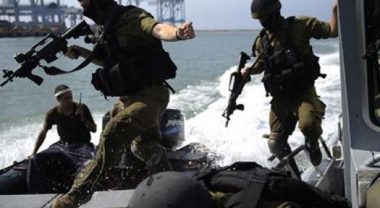 Israeli navy ships attacked, on Tuesday morning, several Palestinian fishing boats, and opened fire on them, before abducting five fishers from the same family, and confiscated one of their boats.

The navy attacked the fishing boats less than four nautical miles from the shore near Gaza city, chased them while firing live rounds and spraying them with high-pressure water cannons.

The fishers were cuffed and blindfolded before the soldiers took them, and one of their boats, to Ashdod port.

The attack is part of daily violations against the fishers and their boats in the besieged and improvised Gaza Strip, and are frequently accompanied by limited invasions by the soldiers into Palestinian farmlands close to the border fence.

On Tuesday at dawn, Israeli soldiers invaded the town of al-‘Eesawiyya, in occupied Jerusalem, violently searched and ransacked homes, and abducted five Palestinians, including three siblings.