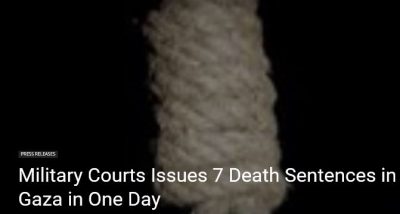 According to the Palestinian Center for Human Rights (PCHR’s) follow-up, the Gaza Permanent Military Court issued 3 death sentences by hanging against A.A.A. (33), KH.M.A. (44), both from Khan Yunis and ‘A.’A.H (65), form Jabalia.

Moreover, the Military Court of Appeal upheld 2 death sentences by hanging against W.S.A. (42), from Gaza, and M.B.D (31), from al-Nuseirat.

Furthermore, the Military Supreme Court rejected an appeal filed by two convicted persons, ‘A.’A.M (55) and R.H.’A (55), both from Khan Yunis, and upheld the death sentences by hanging issued against them. It should be noted that the two upheld sentences will be implemented following the Palestinian President’s ratification.

PCHR is gravely concerned over the excessive application of this punishment in the Gaza Strip in light of absence of fair trial guarantees and lack of fragile interrogation techniques. PCHR calls upon the judiciary in Gaza not to issue any death sentence in light of the division and the resulted absence of rule of law and techniques needed to come out with a conviction based on certainty.

PCHR refuses that civilians appear before the military judiciary, constituting a flagrant violation of Article 30 of the Palestinian Basic Law (PBL), which stipulates that “Each Palestinian shall have the right to find sanctuary in the legal system.” PCHR also calls upon the Palestinian President not to ratify any death sentence.

PCHR follows up with deep concern the excessive application of this serious and irreversible punishment. PCHR is also gravely concerned over the continued application of death penalty in the PA controlled areas, and calls upon the Palestinian President to sign the 1989 Second Optional Protocol to the International Covenant on Civil and Political Rights, aiming at the abolition of the death penalty and issue a presidential decree to halt it until the Palestinian Legislative Council (PLC) convenes and abolishes it.

PCHR also calls upon the PLC, if convened, to review all legislations related to the death penalty, especially the Penal Law No. 74 (1936) which remains in effect in the Gaza Strip, and the Jordanian Penal Code No. 16 (1960) that is in effect in the West Bank, and enacting a unified penal code that is in line with the spirit of international human rights instruments, especially those pertaining to the abolition of the death penalty.

Moreover, PCHR points out that the call for abolition of the death penalty does not reflect tolerance for those convicted of serious crimes, but rather a call for utilizing deterrent penalties that maintain our humanity.