Army Abducts A Palestinian And His Sister Near Bethlehem 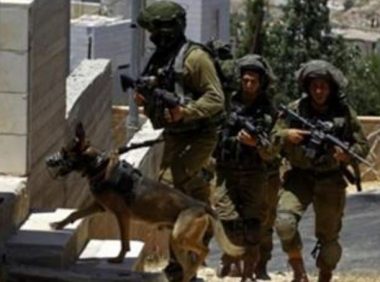 Several Israeli military vehicles invaded, Tuesday, the al-Khader town, south of West Bank city of Bethlehem, searched homes and abducted a Palestinian and his sister, in addition to summing their sister, and two former political prisoners, for interrogation.

The soldiers invaded, and violently searched several homes throughout the town, and abducted Saher Mahmoud Issa, and his sister Saja, in addition to summing their sister, Suzan, for interrogation in Etzion military base and security center, south of Bethlehem.

Media sources in al-Khader said dozens of soldiers, accompanied by army vehicles are still in the town, and around it.

On Tuesday morning, Israeli navy ships attacked several Palestinian fishing boats, and opened fire on them, before abducting five fishers from the same family, and confiscated one of their boats.

On Tuesday at dawn, Israeli soldiers invaded the town of al-‘Isawiyya, in occupied Jerusalem, violently searched and ransacked homes, and abducted five Palestinians, including three siblings.