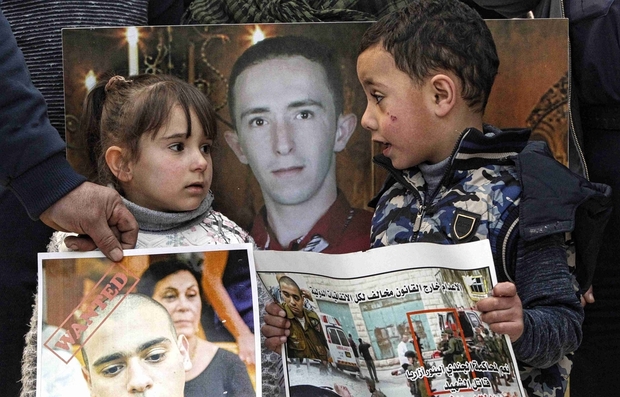 Elor Azaria, the soldier who shot and killed 21-year old Abdul-Fattah Sharif in March 2016 while Sharif was lying on the ground, unarmed and wounded, has been sentenced by an Israeli military court to an 18-month sentence – a sentence which Palestinian leaders say gives the “green light” for Israeli soldiers to continue execution-style killings of Palestinian civilians.

21-year old Abdul-Fattah Sharif was killed on March 23rd, along with his friend Ramzi Aziz Qasrawi, 21. The two were killed after allegedly lightly wounding an Israeli soldier with a knife.

Sharif was executed by a shot to the head while lying wounded on the ground. The video of the incident shows Israeli soldiers and paramilitary settlers milling around while two Palestinians are lying on the ground, one wounded and the other already killed.

The video shows an ambulance carting away the Israeli soldier who was mildly wounded by a small knife wound, then one of the soldiers lifts his gun and shoots the prone, wounded Palestinian in the head, killing him.

“He’s not dead, shoot him in the head”, was spoken by a military medic to Azaria, who then shot Sharif in the head. No charges were filed against the medic.

Although Elor Azaria, who fired the fatal shot, was charged with manslaughter, no other Israeli soldiers or officers faced charges – despite evidence that the order to kill Sharif was given from higher up the chain of command.

Azaria’s lawyers sought a full acquittal of all charges, and say they will appeal the ruling to demand Azaria’s release.

“He’s not dead, shoot him in the head”