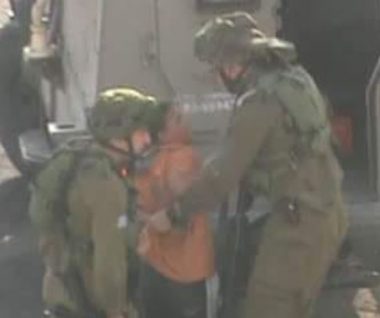 Israeli soldiers abducted, earlier Thursday, five Palestinians from their homes, in addition to two children at a military roadblock, in several parts of Hebron governorate, in the southern part of the occupied West Bank.

The Hebron office of the Palestinian Prisoners’ Society (PPS) said the soldiers invaded many homes in Beit Ummar town, north of the city, and abducted Ahmad Khader Abu Hashem, 52, and Mousa Hasan Za’aqeeq, 25.

It added that the soldiers also invaded and searched homes in Yatta, Ethna, ath-Thaheriyya and Halhoul towns, and installed roadblocks at the entrance of the Sammoa’ town, the al-Fawwar refugee camp junction, and Abu Sneina neighborhood in Hebron city.

The soldiers then abducted Abdul-Hamid al-Battat, Wisam Gheith and Hazem Ahmad Zama’ra, before moving them to Etzion military base and security center, north of Hebron.

In related news, the soldiers stationed at a military roadblock in the Old City of Hebron, abducted two children, identified as Qussai Shehada Gheith, 12, and Odai Abu Hitta, 9, while they were heading to their UNRWA-run school.