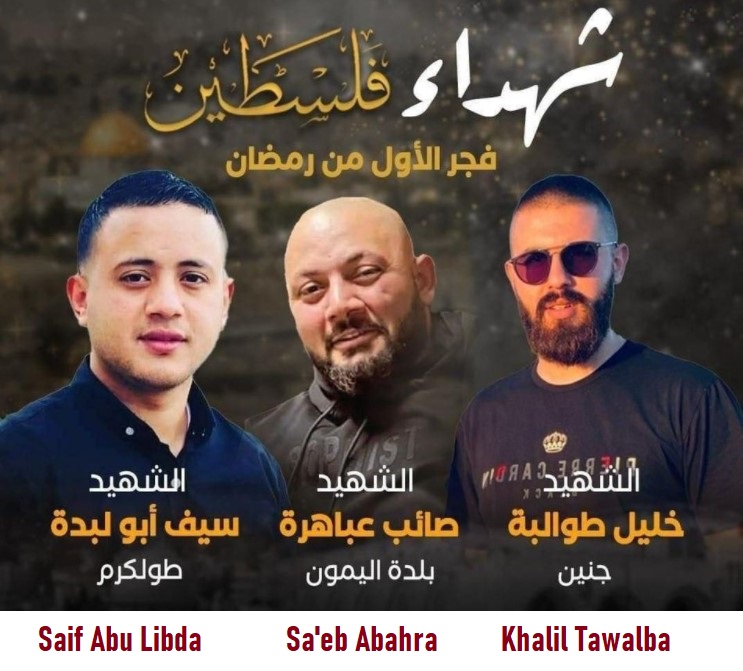 Updated: The three assassinated Palestinians have been officially identified as: The Israeli army and internal security said they have no intention to transfer their corpses to their families for burial.

The soldiers also towed the car driven by the three slain Palestinians.

In a statement, the Al-Quds Brigades, the armed wing of the Islamic Jihad, said the three Palestinians were members of the group.

In a statement condemning the assassination, the Hamas movement said: “The ongoing killing of our people in the West Bank will not grant Israel peace or stability and will not grant it legitimacy for its illegal occupation of our land. On the contrary, these attacks will only grant our people more power, determination, and unity in resisting the occupier everywhere.”

The Palestinian TV said the undercover soldiers fired a barrage of live ammunition at a Palestinian car, killing the three young men and wounding several others. The undercover Israeli soldiers surrounded the Palestinian car before opening fire at it, clearly indicating that the soldiers weren’t there to arrest anybody but to assassinate them.

The Palestinian Red Crescent Society said its medics could not approach the three young men for more than two hours and added that a fourth Palestinian was injured, especially since the soldiers declared the area a closed military zone.

The soldiers also fired many gas bombs and concussion grenades at the Palestinians who tried to enter the area.

The soldiers told the PRCS medics to bring body bags to take the corpses of the three Palestinians, but the move was a ploy because that is when the soldiers put the bodies in an Israeli ambulance and drove away.

The Palestinian medics were never allowed to approach the three Palestinians and therefore could not administer any first aid that could have saved their lives.

Eyewitnesses said the soldiers pulled the Palestinians out of their car, and again fired several rounds at them while on the ground to ensure the kill.

Israeli sources said the army was operating in the area to arrest Palestinians, while the Israeli Security Agency (Shin Bet) alleged that the Palestinians “were responsible for a shooting attack in the Tulkarem, and planned additional attacks”.

The sources added that the soldiers also found weapons in the car and confiscated them and said two soldiers were wounded during the attack. The Israeli Internal Security Service claimed that three young men “intended to carry out shooting attacks against the soldiers and other targets.”
It also said the undercover soldiers were monitoring the Palestinians for several hours before killing them, adding that they are members of the Al-Aqsa Brigades, the armed wing of the Fateh movement.
The Israeli Jerusalem Post claimed the three were killed during an exchange of fire with the undercover forces, and added that four soldiers were injured, one seriously.
The undercover soldiers fired several live rounds at the car before the reported exchange of fire took place.
This incident is not related to news from Israeli agencies about a colonialist settler who was killed and another injured in what the army confirmed as a traffic accident near Qalqilia, in the northern West Bank.

Israeli sources said the car driver hit two motorcyclists near the Tzufim colony and turned himself in to Israeli police.

In related news, the soldiers shot a young Palestinian man near the main road leading to Anata town, northeast of occupied Jerusalem, and abducted him.

On Friday afternoon, Israeli soldiers killed a young Palestinian man, Ahmad Younis al-Atrash, 29, during a procession in Hebron city in the southern part of the occupied West Bank.