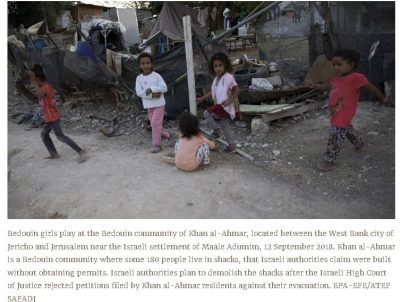 The International Committee of the Red Cross (ICRC) issued a statement, Thursday, calling in Israel to abide by International Humanitarian Law, and expressing concern about Israel’s plan to demolish al-Khan al-Ahmar Bedouin community in the occupied West Bank.

David Quesne, the head of the ICRC Mission in occupied Jerusalem, said the planned demolition on the community will dramatically affect the lives and dignity of the inhabitants.

He added that Israel’s zoning and planning policies in the West Bank fail to serve the Palestinians, living under Israeli occupation, and cannot be used to justify the destruction of civilian property.

Jerusalem/Tel Aviv (ICRC) – The International Committee of the Red Cross (ICRC) is deeply concerned by Israel’s decision to demolish private houses and other structures in Khan al Ahmar village in Area C of the West Bank.

“The planned demolitions will dramatically affect the lives and dignity of this community,” said David Quesne, Head of ICRC Mission in Jerusalem. “As long as zoning and planning policies in the West Bank fail to serve the population living under occupation, they cannot be used as justification for destruction of property.”

As the Occupying Power in the West Bank, Israel is bound by the International Humanitarian Law. It has a duty to ensure the protection, security, and welfare of the people living under occupation and to guarantee that they can live as normal a life as possible, in accordance with their own laws, culture, and traditions.