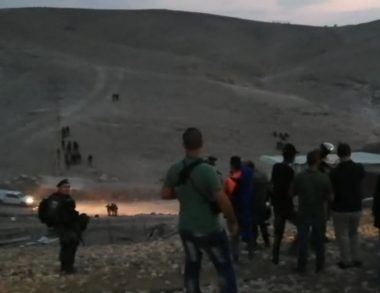 Israeli soldiers invaded, on Thursday at dawn, the newly established al-Wadi al-Ahmar Palestinian village, which was built for the Palestinian Bedouin families next to the al-Khan al-Ahmar village, threatened with pending Israeli demolition, east of occupied Jerusalem.

Dozens of soldiers invaded the area after completely surrounding an isolating it, while the protesters started chanting “Allahu Akbar” (God is the Greatest), in addition to chanting for the liberation of Palestinian by ending the illegal Israeli occupation, and its apartheid colonialist policies.

The soldiers dismantled and removed the newly installed homes, and prevented the protesters from reaching them.

Palestinian Minister Waleed Assaf called on the residents, and peace activists, to hold massive nonviolent protests in al-Khan al-Ahmar to protect the families from displacement as Israel intends to go ahead with its illegal decision to demolish it, despite international condemnation.