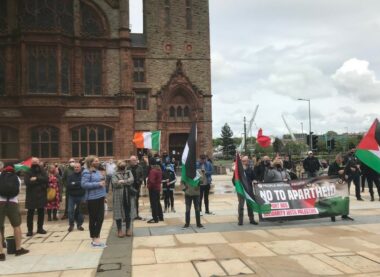 26 May 2021 – for IMEMC News, Niall Ó Brolcháin – In a historic move Wednesday, Ireland’s parliament, the Dáil, is thought to have become the first European country to condemn Israel’s ‘de facto annexation of Palestinian land with regard to Jewish settlements.

All government, opposition parties, and independents united in fully backing the amended motion.  An original motion from the left-wing party People Before Profit (PBP) calling to expel the Israeli ambassador was rejected.

Ireland’s foreign minister, Simon Coveney, said the landmark vote was a ‘clear signal of the depth of feeling across Ireland.’

Israel hit back with a strong statement, calling the motion ‘outrageous’, ‘baseless’, and a ‘victory for extremist Palestinian factions.’  A spokesperson for Israel’s foreign ministry, Lior Haiat, said it would distance Ireland from its ambition of playing a constructive role in the conflict.

Senator Frances Black, a tireless campaigner on behalf of Palestinian rights, said in a Facebook post: ‘The motion on annexation in Palestine has PASSED!! All parties supported!! I’m over the moon!! Ireland is the first country in Europe to label Israel’s illegal settlements and land grab as a de facto annexation of Palestinian land. This is historic!!! Thank you to all Oireachtas (upper house) members who supported it.. which was all parties and none! Amazing!! .’

John Brady, a member of Ireland’s parliament’s opposition party Sinn Féin, which sponsored the motion, called the vote a victory for justice.

(2) John Brady TD on Twitter: “Tonight’s passing of the @sinnfeinireland motion on the illegal annexation of Palestinian lands by Israel, is a historic moment,a victory for justice &amp; a recognition of the right of the Palestinian people to self-determination. Focus now needs to be on the consequences for Israel” / Twitter

Israel has occupied East Jerusalem since 1967 and expanded settlements in the area, in violation of international law. Most countries do not recognize Israel’s claim over the area, which is widely seen as an obstacle to peace.

Palestinians view East Jerusalem as the capital of a future Palestinian state.