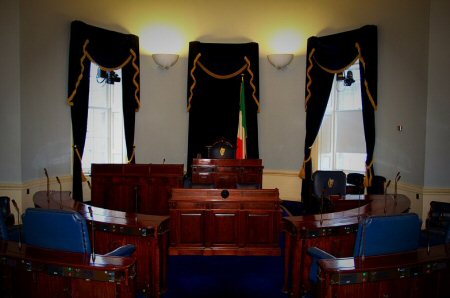 The upper house of the Irish parliament, the Seanad Éireann, voted on July 11, in favor of a bill to ban the purchase of goods and services from illegal Israeli settlements.

However, according to Al Ray, the Seanad voted to delay the debate indefinitely after Israel protested, as Israeli Prime Minister Benjamin Netanyahu summoned the Irish ambassador to Israeli occupation, Alison Kelly, who explained that the Irish government did not support the bill.

Netanyahu had claimed the bill sought to “harm the state of Israel” and was an attempt to support the Boycott, Divestment and Sanctions (BDS) movement.

The proposed law passed 25 to 20, and was introduced by an independent senator, drawing support from all of Ireland’s major political parties except the governing Fine Gael party, according to the Hebron Defense Committee.

If passed, the bill will have to go through several more stages of review and amendment before it is signed into a law. The bill will now go to the lower house of parliament for a debate and vote.

Israeli settlements in both the occupied West Bank and the Golan Heights are illegal and constitute a war crime under both the Rome Statute of the International Criminal Court and International Humanitarian Law (IHL), which prohibit occupying states from transferring their own civilian population into occupied territory.

The colonies, considered illegal under international law, are constructed on Palestinian land in the West Bank in order to annex territory for the state of Israel.

Since its creation in 1948 on what was then Palestine, Israel has never declared its borders, and has continually expanded its territory through military force until the Palestinian people are now crowded onto thirteen percent of their original land, with Israeli forces surrounding all their borders and controlling movement inside their territory as well.

In the U.S. Senate, a bill doing the opposite has been proposed.

The U.S. bill would criminalize any person or company that refuses to do business with Israeli companies for political reasons.

The Israel anti-Boycott Act is an unprecedented measure that would prevent U.S. citizens from engaging in their constitutionally protected right to boycott companies whose practices they disagree with.