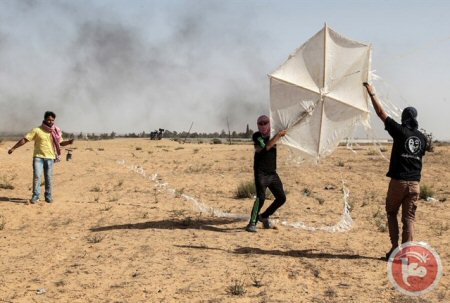 Israeli drones carried out an airstrike targeting a group of Palestinian kite-flyers in eastern Rafah City, in the southern Gaza Strip, on Wednesday afternoon.

Palestinian security sources said, according to Ma’an, that Israeli drones launched 1 rocket at a group of Palestinians near the Sufa crossing in northeastern Rafah.

Meanwhile, eyewitnesses said that several fires erupted alongside the eastern borders of the Gaza Strip.

Palestinian youth had launched a number of kites lit on fire towards Israeli areas surrounding the Gaza Strip borders since Wednesday morning.

Earlier this week, 33 fires had erupted in forests and agricultural areas in Israeli communities surrounding the Gaza Strip borders. Israeli officials blamed the fires on kites and balloons carrying fire across the border – but drought conditions have made fires commonplace in southern Israel.