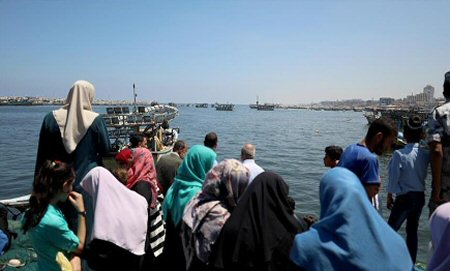 Israel on, Wednesday, released seven passengers of a humanitarian flotilla that was attempting to break the decade-long blockade of Gaza.

The flotilla was intercepted by Israeli naval forces on Tuesday, according to Al Ray.

Raed Abu Dair, coordinator of Gaza’s National Committee for Breaking the Siege, told Anadolu Agency that all of the boat’s passengers except the captain and his assistant were released.

Stating that those released arrived in Gaza by passing through the city of Beit Hanoun, in the northern Gaza Strip, he called on international organizations to obtain information on the condition of the captain and assistant.

Earlier, Israeli military spokesman Avichay Adraee said the boat, which had been carrying eight passengers, was “stopped without incident.”

Adraee said that, after being searched, the vessel and its passengers would be taken to Israel’s Port of Ashdod.

He had gone on to defend what he described as Israel’s “naval cordon” on Gaza, calling it “necessary and legal…for maintaining Israel’s security and its maritime borders.”

The flotilla set out from the Gaza coast earlier, Tuesday, in hopes of breaking Israel’s 11-year blockade of the Gaza Strip.

It was the second humanitarian flotilla to set out from Gaza since Palestinians first began holding rallies along the Gaza-Israel security fence, on March 30th of this year.

An earlier flotilla, which set out from Gaza on May 29, carrying Palestinian medical patients and university students, was likewise intercepted.

Since 2007, the Gaza Strip has suffered under a crippling Israeli blockade that has gutted its economy and deprived its roughly 2 million inhabitants of many basic commodities.

Since March 30, more than 130 Palestinians have been killed by Israeli army gunfire, and thousands more have been injured while taking part in regular demonstrations along the fence.

Demonstrators demand an end to Israel’s continuing occupation of Palestinian land and its ongoing blockade, which has brought the impoverished Gaza Strip to the verge of a humanitarian catastrophe.