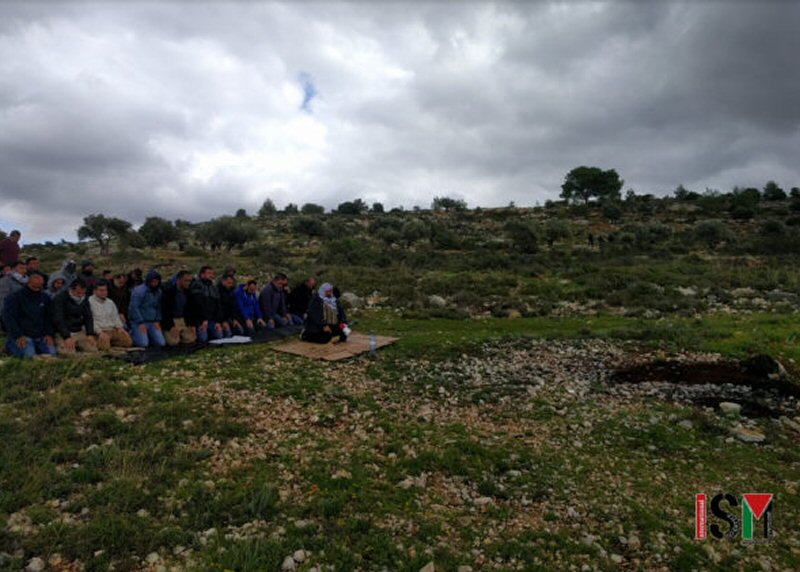 In 2018, settlers invaded land atop al-Risan Mountain, which overlooks the three villages Ras Karkar, Kafr Ni’ma and Kharbatha Bani Harith. Since then, local Palestinians have gathered in a valley below the mountain, every Friday, to non-violently protest the theft of their land, trying each week to get past occupation forces who now keep them from accessing it.

Earlier today ISMers attended the weekly protest. We arrived in the valley at 12 midday, where a group of approximately 40 locals were gathering. Border Police were stationed on the hillside across from us. As the protesters tried to lay down a large plastic mat to pray on, they were fired upon with tear gas. They tried to set down the mat in several different locations, but were fired upon again and again.

Some of the younger demonstrators wielded slings, just as David did against Goliath, in the Valley of Elah, not far from here. Their rocks fell short of the occupation forces’ defensive line, while some managed to hurl tear gas canisters back toward the border police.

Border police continued to fire tear gas even as protesters retreated, pushing us back to our vehicles. They persisted in their firing, eventually forcing us to leave the site by car. Protesters had to be cautious today as there was no ambulance on site, and serious injuries have been sustained in previous weeks.