Playground Collapses in Jerusalem due to Israeli Excavations 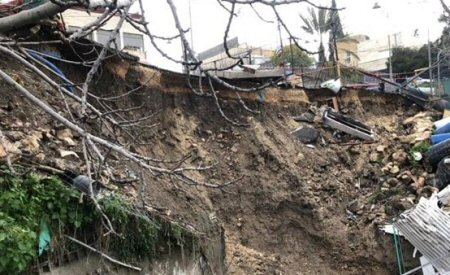 Heavy rain caused the ground of a field, in the Silwan neighborhood of occupied East Jerusalem, to collapse on Saturday morning.

Jawad Siyam, from the Wadi Hilweh Information Center, said that residents of the neighborhood woke up to a new collapse, this time in the ground of a field (used as a playground) and the surrounding wall.
The collapse was reportedly due, mainly, to the continuous Israeli excavations in the area, building tunnels leading to the Al-Aqsa Mosque compound, from its western side.

Siyam said that Israeli settlers’ excavations under and around the playground are continuous, before dirt is emptied and moved from under ground, pointed out that the Israeli authorities are digging tunnels in favor of settlement project ignoring the risks towards 5,000 residents of the neighborhood.

He added that heavy rain revealed the amount of excavations and its danger on the lives of locals.

Owner of the land on which the playground is built, Muhammad Attallah, told the center that the collapse comes as a result of 12 years of underground excavations.

Ma’an further reports that, in 2017, Palestinian residents of three houses in Wadi Hilweh, that Israel had ordered the evacuation of due to severe structural damage, refused to leave their homes and accused Israel of indirectly attempting to expel them from Jerusalem City.

Israel frequently allows excavations and archaeological digs that threaten the structural integrity of Palestinian homes and holy sites in the area.