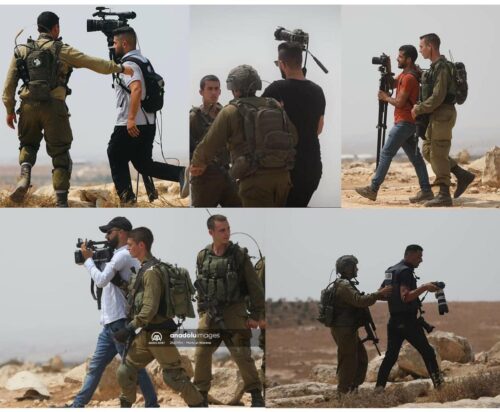 Israeli troops attacked a group of journalists covering a protest in the South Hebron Hills several days ago, with one of the soldiers telling the reporters as they seized their cameras and took them into custody that the army had orders to “go after journalists”, according to eyewitnesses.

According to Israeli journalist Haggai Matar of +972 Mag, “On Friday, Israeli soldiers arrested seven Palestinian journalists who were reporting on a non-violent protest against illegal settlements in the South Hebron Hills in the West Bank. Journalists were cuffed and taken to a police station where they were later released.”

Mashour Wahwah, one of the detained journalists, told reporters with the Israeli newspaper Ha’aretz that he was photographing the Israeli military abducting several Palestinian youth, but that there had been no confrontations and the army did not need to use any riot control measures. He is quoted by Ha’aretz as saying, “When I photographed the arrest they detained me as well, but we were on our way out, going home”.

This attack on the media comes in the midst of a campaign of reppression of Palestinian media by Israeli military forces.

In May, during the 11-day-long bombing campaign launched by Israeli forces against the population of the Gaza Strip, the Israeli military bombed the Al-Jawhara tower, located in Gaza, which hosts the offices of 13 media institutions and NGOs.

“The PJS said the attack was deliberate and targeted. There were no injuries as journalists evacuated their offices after the Israeli army warned some of the media that the building would be bombed. However, media organisations lost their equipment. The IFJ said the Israeli government must compensate the media for their financial losses.”

Attacks on journalists are a direct violation of the Fourth Geneva Convention, to which Israel is a signatory.