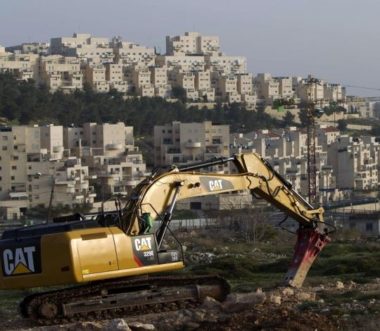 The so-called Israeli Higher Planning Committee has approved, on Saturday evening, the construction of hundreds of new units in the illegal Beitar Illit colony, built on Palestinian lands in Bethlehem.

The new units are planned to be built on Palestinian lands, owned by residents of Husan, Nahhalin and Wad Fukin village, west of Bethlehem, in the occupied West Bank.

Hasan Breijiyya, the head of the office of the Colonization and Wall Resistance Commission in Bethlehem, said that Israel approved the construction of 770 new units in Beitar Illit.

He added that the approval comes just three days after 70 new units were approved in Maksad illegal colony, southeast of Bethlehem.

Israel’s colonies in the West Bank, including in and around occupied East Jerusalem, are illegal under International Law, and various treaties, especially Article #49 of the Fourth Geneva Convention, which clearly states that “The occupying power shall not deport or transfer parts of its own civilian population into the territory it occupies.”