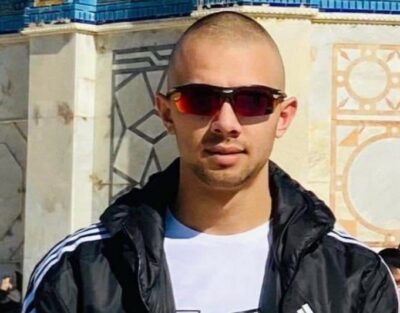 On Thursday evening, the Israeli occupation government approved the punitive demolition of the family’s home of a young Palestinian man who was killed after exchanging fire with Israeli soldiers near Jerusalem in October of this year.

The army said the Home Front Commander signed an order to “confiscate and demolish the flat” inhabited by the family of Odai Tamimi.

The family and the Palestinians living in adjacent apartments in the building in Shu’fat refugee camp north of occupied Jerusalem filed several appeals, especially since the demolition would cause damage to several apartments, but the Home Front Commander denied the appeal and approved the demotion.

It is worth mentioning that Odai Kamal Tamimi, 22, was killed on October 19, 2022, after exchanging fire with Israeli soldiers at the entrance of Maaleh Adumim illegal colony, built on stolen Palestinian lands southeast of occupied Jerusalem.

Video footage shows the Palestinian continuing to exchange fire with the officers even after he was shot multiple times.

Israel’s home demolition policy is an illegal act of collective punishment that constitutes war crimes and violates various international and human rights treaties, including the Fourth Geneva Convention of 1949 for the Protection of civilian persons in times of war, as well as article 17 of the Universal Declaration of Human Rights, issued in 1948, and numerous United Nations resolutions.