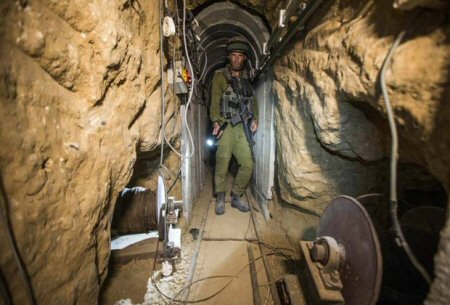 Human rights groups have condemned an Israeli decision to withhold bodies of five Palestinians who were killed in an Israeli attack on a tunnel dug under the Gaza-Israel border, last week.

Israeli authorities announced, on Sunday, that the army had uncovered the bodies of the five men – identified by Islamic Jihad as Alaa Abu Ghorab, Shadi al-Hamri, Bader Musabah, Ahmad al-Sabakhi and Mohammad al-Buhaisi – who were missing since last week, when Israel blew up a tunnel on the Gaza-Israel border, killing 12 Palestinians.

Initially, the five were believed to still be alive. However, rescue teams in Gaza were prevented by the Israeli army from carrying out a search campaign until advances were made for the return of missing Israelis held by Hamas – most notably Israeli soldiers Hadar Goldin and Oron Shaul, who are believed to have been killed during Israel’s offensive on the besieged enclave in 2014.

After Islamic Jihad declared that the missing five were dead, Israel discovered their bodies and announced that their remains would be withheld from the families.

Rights groups Adalah and the Al-Mezan Center for Human Rights released a joint statement on Sunday night, saying that the families of the Islamic Jihad members still “maintain their right to demand the return of the bodies of their relatives for burial”.

Israel’s policy of holding bodies “contradicts the principles of international law,” the groups stated. “Bodies of individuals who are killed during situations of conflict must be returned to their families for burial with dignity”.

According to Palestinian human rights group al-Haq, Israel has held more than 161 slain Palestinians from their families since 2015, nine of whom continue to be held. After the confiscation of the remains of the Islamic Jihad members, this number has increased to 14.

In addition, hundreds of Palestinians are believed to be buried in Israel’s “cemetery of numbers” – graves in Israel marked only by numbers.

In September four bodies held by Israel were buried there, despite an ongoing appeal in the Israeli Supreme Court demanding that Israel release the bodies.

Israel withholds the bodies of slain Palestinians in order to use as bargaining chips in future negotiations with Palestinian leaders.

Jonathan Conricus, the Lieutenant Colonel of the Israeli army, told Al Jazeera that despite Israel being “prepared” for a conflict, “we do not aspire to escalate the situation. We want to preserve stability for the Israeli population and for those in Gaza”.

Conricus added that there was “no direct relationship” between holding the bodies of the slain Islamic Jihad members and the army’s purported aim of preserving peace.

However, senior Islamic Jihad member Ahmed al-Mudallal feels differently, telling Al Jazeera that the group is “considering its options” against Israel. “We will not accept Israel’s blackmail”, he said, and vowed to use any means necessary to ensure the return of the bodies.

He added that Israel “would not be holding the bodies for long”.

“Israel fully understands the importance of burial rituals in Palestinian societies, whether it be for Christians or Muslims,” Dawoud Yusef, advocacy coordinator for prisoners’ rights group Addameer, told Al Jazeera.

Israel’s policy of holding slain Palestinian bodies “seeks to punish the families of those engaged in any resistance activities,” he said. “It doesn’t matter what these people were doing, the families still have the right to give them a burial”.

He added that the group considers Israel’s policy a form of “collective punishment” and a serious violation of international law.