Israel Confident of its Ability to Expel Palestinian Communities 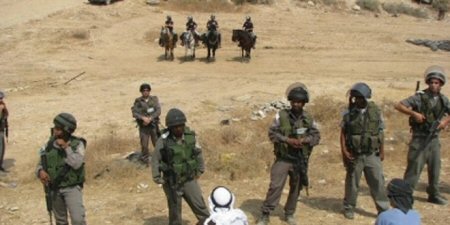 Over the past month, the Israeli state has informed three Palestinian communities that it intends to expel them from their homes and land.

According to Israeli human rights center B’Tselem, the notification was made by leaving orders on the roadside.

In the northern Jordan Valley, on 9 November, 2017, the state notified two communities – Umm a-Jamal and Ein al-Hilweh – that they must leave their homes within eight days. These communities total 20 families, five of whom live in the area on a seasonal basis.

The total number of residents is 130, including 66 youths and children under the age of 18.

In the Ma’ale Adumim area, on 16 November 2017 the state informed the residents of Jabal al-Baba that they must leave their homes within eight days.

This community numbers about 60 families, and has a total of 284 residents, including 151 youths and children under the age of 18, according to the PNN.

Israel has acted for years to expel communities around the West Bank. In the past, its efforts were based mainly on military orders concerning planning and building. However, the proceedings concerning such orders are protracted and require the precise mapping of the land and buildings, as well as the issuing of separate demolition orders for each building.

Now the state has found a new mechanism it hopes will enable it to circumvent such proceedings and accelerate the expulsion of residents: the Order concerning Unauthorized Buildings (Temporary Provision) (Judea and Samaria) (No. 1539), 5744-2003.”

This order was originally intended for the expulsion of settlers from “outposts” established around the West Bank, although the state very rarely used it for this purpose.

The order allows the military commander to declare an area in the West Bank a “confined area,” and to order the eviction of all property in that area.

On this basis of this order, GOC Central Command Major-General Roni Numa signed the new orders concerning the Palestinian communities.

It seems that Israel is so confident in its ability to expel entire villages without incurring judicial or international criticism that it is no longer bothering to create even the illusion of legal proceedings. However, the difference between the proceedings is purely technical.

The planning and building proceedings never stopped the state; even if they managed to postpone expulsion, they never removed the threat of expulsion from thousands of people.

Over many years, thousands of Palestinians in dozens of communities have lived under a constant and real threat.

The state has refused to regulate their status, allow them to connect to the water and electricity infrastructure, establish educational institutions for their children, pave roads to their living areas, and maintain a reasonable living routine.

The state has recently declared its intention to expel two additional communities over the coming months – Susiya, in the southern Hebron Hills, and Khan al-Ahmar, close to Ma’ale Adumim.

Defense Minister Avigdor Lieberman announced that in the absence of opposition from the American Administration, these communities will be expelled by April 2018. The expulsion proceedings against these communities have continued for years before the Supreme Court, which has refrained from prohibiting their expulsion.

Whatever the proceedings used by the state in its attempt to expel Palestinian residents from their homes, the crime is the same: the forcible transfer of a protected population, which amounts to a war crime.

This is the case whether the violence used is direct or indirect, physical or administrative. Whether the expulsion is undertaken by force or by creating an intolerable reality that forces the residents to leave their homes and land – the essence is the same. All those involved in committing this crime – including the Prime Minister, Defense Minister, the justices who approve the expulsion, and the GOC who signs the orders – bear personal liability.