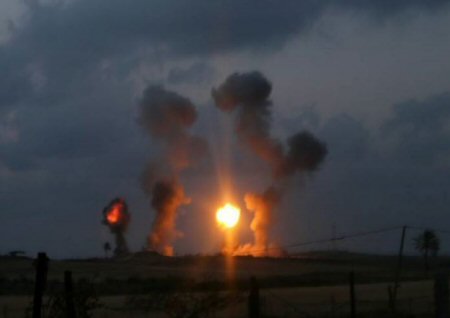 He said that Israeli military jets fired three missiles at a site west of Gaza city, in the central Strip, causing heavy destruction to the site as well as to nearby homes.

The Israeli Air Force also fired two missiles and struck a site near Beit Lahia town in the north, causing major damage to the site and to adjacent houses.

One Palestinian farmer was moderately injured during the assault on farmlands, located east of Khan Younis, the Palestinian Information Center reported.

The condition of the wounded man was not known at the time of this report.

Local sources said that Israel’s pre-dawn bombardment focused on the area surrounding Khan Younis, while other airstrikes hit the central Strip, near Gaza City, as well as Beit Lahia in the north.

Sources added that Palestinian resistance groups responded to the attack by firing rockets towards Israeli settlements, 3 of which were intercepted by Israel’s missile defense system, known as the Iron Dome.

For nearly two weeks now, Israel has been bombarding and shelling the coastal enclave, as well as tightening the already strict siege. The Israeli military is using excessive force on a population with no army, no navy, and no air-force.