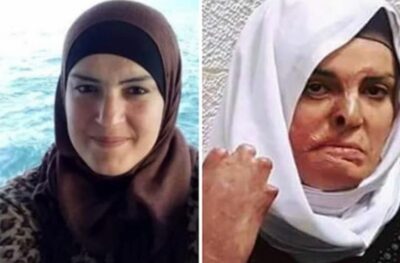 The Israeli authorities continue to deny a Palestinian female detainee, Israa’ Ja’abis, the urgently needed surgeries and medical treatment resulting from the serious burns to %50 of her body, before she was abducted by the soldiers in the year 2015.

A week ago, the Wa’ed Society For Detainees has reported Ja’abis still needs many surgeries to alleviate her continued suffering from the serious burns she sustained to more than %50 of her body, including her face, arms, and hands.

Despite receiving treatment and surgeries after her abduction, she still needs many surgeries, professional medical attention and rehabilitation.

Israa Ja’abis, 35, from Jabal al-Mokabber in occupied Jerusalem was abducted by the soldiers on October 11, 2015 at the al-Za’im military roadblock near Jerusalem, when a gas cylinder, she was carrying in her car exploded, while she was driving back home coming from Jericho city.

She sustained burns, which consumed 60% of her body, lost 8 of her fingers, and suffered deformities in the face and back.

The married mother of one child was sentenced to 11-year in prison on charges of trying to carry out an attack against the soldiers.

The wounded woman and her family vehemently denied the Israeli allegations and affirmed that what happened was a serious accident, and not an attempt to attack the soldiers.

In January of the year 2018, the Israeli Supreme Court in Jerusalem rejected an appeal presented by the severely-burnt detainee Israa Ja’abis, asking to reduce her 11- year sentence.