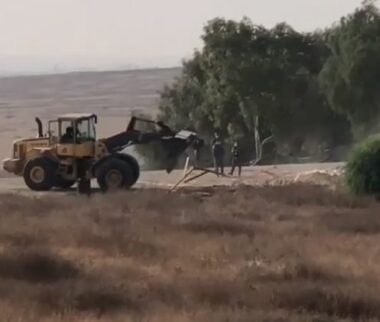 The Israeli authorities demolished, Thursday, the al-Arakib Bedouin village in the Negev for the 178th time, displacing entire families.

Aziz at-Touri, one of the residents of the “unrecognized” village, said the Israeli authorities continue to ignore their suffering and are constantly increasing it, especially amidst the heat in the Negev desert and the ongoing spread of coronavirus.

He added that, although the Negev villages and communities predate the state of Israel, the Israeli authorities continue to their attempts to remove the Palestinians from the area, by constantly displacing them, in order to implement that so-called “Negev Development Plan,” which aims at building colonies and malls, in addition to other projects after forcing the indigenous Palestinians out.

It is worth mentioning that Israel started targeting al-Arakib in the year 2000, and have already demolished it and displaced the families 178 times since then.

The Israeli Committee Against House Demolition (ICAHD) has reported that Israel demolished 2241 structures, including 655 residential structures, in the “unrecognized villages”,  in the Negev.

Like the 34 other Bedouin villages “unrecognized” by Israel, al-Araqib does not receive any services from the Israeli government and is constantly subjected to the threats of expulsion and home demolition.
These “unrecognized” villages were established in the Negev soon after the 1948 Arab-Israeli war, following the creation of the state of Israel, when an estimated 750,000 Palestinians were forcibly expelled from their homes and made refugees.