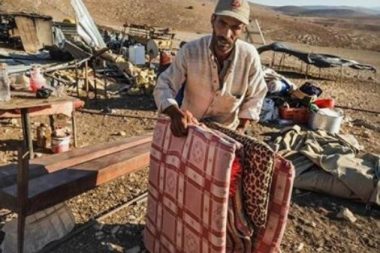 Israeli forces, this morning, dismantled a shack and two residential structures in the Abu Nuwwar and Wadi Abu Hindi Bedouin communities, located to the southeast of Jerusalem.

He added that Israeli municipal staff, under the protection of military forces, barged their way to Abu Hindi Bedouin, an encampment near Abu Dis town that falls outside the E1 area, where they razed two residential structures.

The shack and structures were purportedly demolished for being built without the rarely-granted Israeli permits.

Abu Nuwar is a Palestinian Bedouin community in Area C, with approximately 670 Palestinian residents (88% refugees), a portion of whom reside in the community on a seasonal basis. The community is one of the 46 Bedouin communities in the central West Bank at-risk of forcible transfer because of the coercive environment exerted on them, including a “relocation” plan advanced by the Israeli authorities.

It is also one of the 18 Palestinian Bedouin communities in the eastern Jerusalem governorate that are located in or next to an area slated for the E1 settlement plan, aimed at creating a continuous built-up area between the Ma’ale Adumim settlement and East Jerusalem.

International humanitarian law prohibits the individual or mass forcible transfer of the population of an occupied territory regardless of the motive. Such transfer is a grave breach of the Fourth Geneva Convention thus involving individual criminal responsibility. The destruction of property in an occupied territory is also prohibited, unless absolutely required for military operations, WAFA reports.