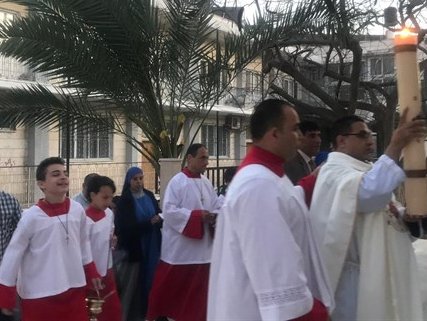 For the first time, Israeli authorities decided this year to deny all travel permits to Palestinian Christians from Gaza to celebrate Easter as they do each year, by processing from Bethlehem to Jerusalem to follow the path of Jesus in the Resurrection.

The number of permits issued by the occupying Israeli military authorities have diminished each year, and have included blanket bans on anyone under age 55 – but this is the first year that the Israeli military decided to allow zero Palestinian Christians from Gaza to travel to Jerusalem for Easter.

There are around 1,100 Palestinian Christians in Gaza, many of whom are descended from the earliest Christians in Palestine (where Christianity originated).

While some practice the Latin faith and mark Easter on the 21st of April this year, many others are Eastern Orthodox, and celebrate Easter on the 28th. Their traditional ceremonies involve a commemoration of Palm Sunday in Bethlehem, then a procession from the Church of the Nativity in Bethlehem to the Church of the Holy Sepulchre in Jerusalem, where Christians believe Jesus was resurrected after death.

According to the Israeli human rights organization Gisha, “The Coordinator of Government Activities in the Territories (COGAT) published the quotas set by Israel for holiday permits to be granted to for Christian Palestinians living under Israel’s control. The quota allocated by COGAT for holiday permits for Gaza residents this Easter is limited to only 200 people over the age of 55, and only for travel abroad; the quotas for West Bank residents are limited to 400 permits for travel abroad, and visits in Israel. This means that Palestinian families separated between Gaza, Israel and the West Bank will not be able to mark the Easter holiday together. It also means that all Christians in Gaza are being denied access to family and to the holy sites in Jerusalem and the West Bank.

“This is the first time that we know of that Israel is outright denying access of Gaza Christians to the West Bank and Israel (on Christmas or Easter). It is also a far smaller quota than previous holidays, when COGAT set quotas of at least 500 permits, or more. Such a sweeping restriction cannot be justified by security needs.

“Israel’s decision to outright deny movement between Gaza and the West Bank this Easter constitutes a further violation of Palestinians’ fundamental rights to freedom of movement, religious freedom, and family life. The increased restriction on the movement of Palestinian Christians points to further implementation of Israel’s ‘separation policy’: a policy restricting movement between Gaza and the West Bank which deepens the split between the two parts of the occupied Palestinian territory.

“Israel allowed only 200 Christians from Gaza, who are over 55-years-old to travel only to the Jordanian Kingdom through the Allenby border crossing, and did not issue permits for those hoping to visit the Church of Nativity in Bethlehem City and the Church of the Holy Sepulcher in East Jerusalem.”

The Israeli rights group Gisha reported complaints against the Israeli authorities regarding the restrictions imposed on Christians who want to travel during the Jewish holiday of Passover, also known as Pesach, which coincides with Easter.

Gisha said, “This is a flagrant violation of the freedom of movement, freedom of worship and freedom of enjoying family life for the Christians in Gaza,” noting that the Strip is an example of a “wider Israeli racist policy.” Gisha added, “Imposing such sweeping restrictions on movement cannot be justified by security needs.”

The rights group also stressed in a statement last week, “Israel is increasingly restricting movement between Gaza and the West Bank so as to deepen the separation between Palestinians torn between parts of the occupied Palestinian territory, and by doing so, advance and legitimize its annexation of the West Bank.”