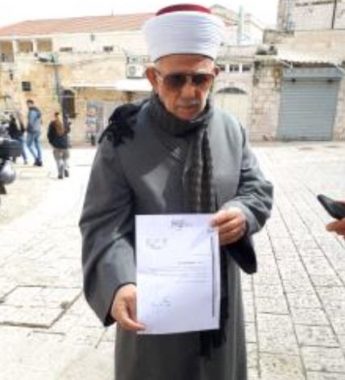 Shortly after detaining him, the Israeli occupation authorities issued orders preventing the head of the Waqf and Islamic Affairs Department in occupied Jerusalem, Sheikh Abdul-Athim Salhab, from entering the Al-Aqsa Mosque for forty days.

Salhab was recently abducted and interrogated after dozens of Palestinians managed to reopen Bab ar-Rahma Mosque of Al-Aqsa, and was denied access into the holy site for one week. The army then closed the mosque again after conducting massive abductions among the Palestinians in the occupied city.

On Sunday, the army detained the Sheikh, once again, and this time handed him an order preventing him from entering Al-Aqsa Compound, this time for forty days.

|Israeli Soldiers Abduct An Imam Of A Mosque In Jerusalem|

On Sunday morning, the army briefly detained one of the civilian guards of the Al-Aqsa Mosque, identified as Arafat Najib, and handed him an order preventing him from entering the holy site compound for six months.

On Friday, the soldiers abducted many guards and employees of the Mosque and handed them orders, preventing them from entering Al-Aqsa for periods varying between several weeks and a few months.

Among the Palestinians who received these orders are Sheikh Salhab, and the deputy head of the Waqf Department, Sheikh Najeh Ebkeirat.

Sheikh Yousef Ed’eis, the Minister of Waqf and Religious Affairs, denounced the escalating Israeli violations against Al-Aqsa, its worshipers and workers, and called for protecting all Islamic and Christian holy sites in occupied Palestine, especially the occupied capital Jerusalem.