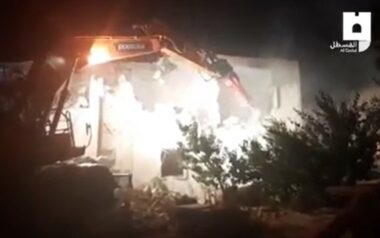 A Palestinian family was forced, Friday, to demolish its two homes in Sur Baher town, south of the occupied Palestinian capital, Jerusalem, in the West Bank.

The family had to demolish its own homes after the City Council in occupied Jerusalem, informed it that if it does not demolish the properties, the city would carry the demolition out using its workers and equipment, before billing them for the costs in addition to a fine of 200.000 Shekels.

Last year, the family was ordered to pay 25.000 Shekels in penalties and fees and started making payments to the city, however, the police invaded the home twenty days earlier, and handed them the final demolition order.

Family members denounced the ongoing displacement of the indigenous Palestinians from their city, Jerusalem, especially the escalating demolitions of Palestinian homes, to replace them with illegal colonies, in direct violation of International Law.

It is worth mentioning that the Land Research Center stated that the Israeli authorities have demolished 950 Palestinian homes and structures, and illegally confiscated more than 24.750 Dunams of privately owned Palestinian lands, in addition to cutting and uprooting 17.740 trees, this year.

Article 49 of the Fourth Geneva Convention states: “The Occupying Power shall not deport or transfer parts of its civilian population into the territory it occupies.” It also prohibits the “individual or mass forcible transfers, as well as deportations of protected persons from occupied territory”.