Israel Forces Palestinian Family To Demolish Its Home In Jerusalem 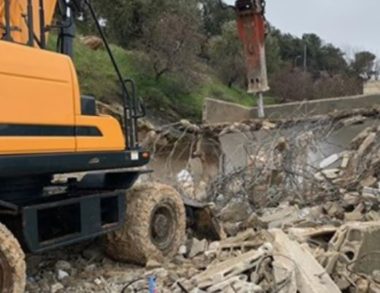 A Palestinian family from Jabal al—Mokabber village, in occupied East Jerusalem, was forced to demolish its own home in, Sunday, after the City Council claimed that the land where the property is built is “state land” where constructions are prohibited.

The owner of the property, Maha ad-Dibis, said she and her family had to demolish their own home, after receiving a demolition order several days ago, informing them that they have twelve days to destroy the property or face very high fines and fees, in addition to the cost of the demolition if the city uses its workers and machines.

Ad-Dibis added the home was built four years ago on land that has been owned by the family for many generations and added that the City Council is alleging the land has been confiscated and is considered a state-owned property.

She also said she has all needed deeds and legal documents, and that the city even imposed an additional 45.000 Shekels fine that the family has been paying over the last three years, in addition to paying legal costs to the attorney and the courts.

The property was inhabited by five family members.