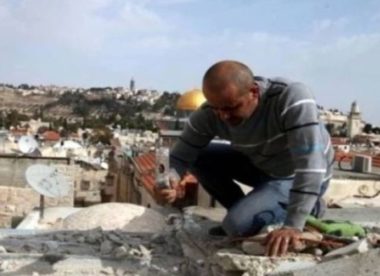 New statistical figures, released by the East Jerusalem-based Center for Economic and Social Rights, show that since early 2020, Israeli occupation authorities have forced 20 Palestinian households in East Jerusalem, to knock down their own newly-built homes themselves.

Director of the center, Ziyad Alhamoury, confirmed that the demolition orders issued by the Israeli authorities in the occupied East Jerusalem, came under the pretext of building without permission.

Those families in the occupied East Jerusalem, have been forced to carry out the demolitions on their own, for fear of high demolition fees, imposed by the Israeli municipality, when these authorities want to demolish a certain Palestinian home, Israel alleges it has been built without permission”, said Alhamoury.

He added that Israeli demolitions of Palestinian-owned homes and apartments, have notably increased since the beginning of 2020.

The Israeli demolition policy against Palestinian residents, is just one dimension of the Israeli occupation’s total dominance over East Jerusalem, where Israel maintains full control as the occupying power, since 1967.

This resolution demanded the so-called Israeli state, to immediately withdraw from the Arab-Palestinian city, in addition to the remainder of the West Bank and the Gaza Strip, along with the Syrian Golan Heights and the Egyptian Sinai Peninsula, which Israel also occupied, back in June of the same year.

According to the latest United Nations Office for the Coordination of Humanitarian Affairs (OCHA) Protection of Civilians Report;

Seventy Palestinian-owned structures were demolished or seized in the West Bank due to the lack of Israeli-issued building permits, displacing 90 people and affecting over 280.

This represents a 250 per cent increase compared with the weekly average of structures targeted since the beginning of the year.

Nine of the affected structures were in East Jerusalem, of which four were demolished by their Palestinian owners to avoid municipal fees. The increase in demolitions and displacement amidst the ongoing pandemic raises serious concern.