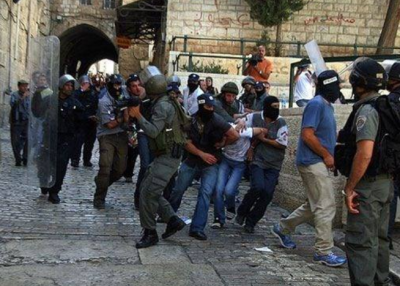 The Israeli army and police imposed severe restrictions on Palestinian worshipers wishing to perform Friday prayers in the Al-Aqsa Mosque, in occupied Jerusalem.

Israeli sources said Prime Minister Benjamin Netanyahu has instructed the Police and the military to significantly increase their deployment.

They added that Netanyahu instructed the army and police to prevent all Palestinian men and women, who are below the age of fifty, from entering the mosque compound.

The orders also prohibit the Palestinians from even gathering outside the mosque’s courtyards, and the Old City.

The soldiers and police officers installed dozens of roadblocks around Al-Aqsa mosque, after thousands of officers flooded the Old City and all areas surrounding the holy site.

Shortly after midnight, dozens of soldiers invaded the courtyards of the Al-Aqsa Mosque, and assaulted hundreds of worshipers, wounding dozens, in addition to shooting 15 worshipers and six medics, with rubber-coated steel bullets in the head, and abducted 120 worshipers.