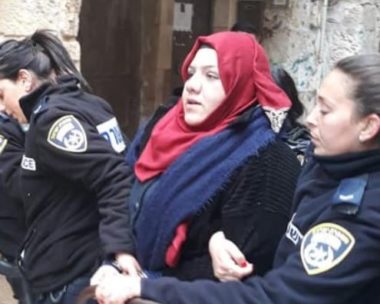 The Palestine Prisoners Services (PPS) said that Shatha Hasan, 20, from the Ramallah district, who was detained on December 11 at her family home, was placed in administrative detention for three months without charge or trial and based on “secret” evidence not even available for her attorney.

On Monday, the Israeli authorities issued an administrative detention order for four months against Bushra Tawil, 26, who was also detained on December 11 at her al-Bireh family home in the Ramallah area during an after midnight army invasion.

The PPS said in addition to Hasan and Tawil, two other Palestinian women – Ala Bashir, 23, from Qalqilya, detained on July 24, and Shorouk Badan, 25, from, Bethlehem, detained on July 25 – are also serving time in administrative detention.

It said another 38 Palestinian women are currently serving prison time in Israeli jails for their activities in resistance of the occupation, including Afnan Abu Sneineh, 17, from Hebron.

The PPS said the Israeli forces have detained 110 women since the start of the year, most of whom were later released.