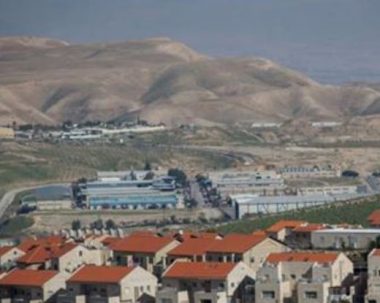 Palestinian researcher and human rights activists, Aref Daraghma, has reported that Israel is planning to turn a military base, in the Northern Plains of the Jordan Valley in the occupied West Bank, into an illegal colony.

Daraghma quoted Israeli human rights groups stating that Tel Aviv is planning to settle 30 Israeli families in what is known as Rosh HaBek’a military base, which was built on Palestinian lands.

He added that this would be the first stage of turning this military base into a new colony in the area, which will most likely be expanded at later stage.

The area in question was used in the fifties of last century as a military base for the Jordanian army, and was taken over by the Israeli forces after the 1967 six-day war, in which Israel occupied the rest of Palestine, including East Jerusalem.

In related news, a group of Israeli colonists, illegally living on Palestinian lands in Khallet Hamad area of the Jordan Valley, started the preparation work for paving a road leading to their illegal colony.

Besides the illegal annexation and isolation of Palestinian lands, including fertile agricultural areas owned by the Palestinians, Israel’s colonies in the West Bank, including in and around occupied East Jerusalem, violate International Law, and the Fourth Geneva Convention to which Israel is a signatory and a constant violator.