Israel To Demolish A Palestinian Home In Jabal al-Mokabber 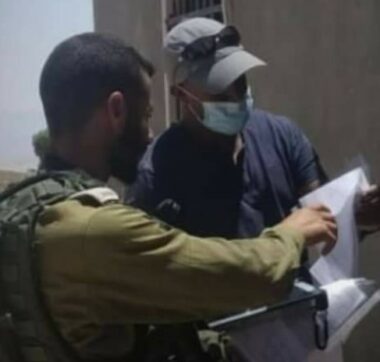 On Wednesday, Israeli soldiers invaded the town of Jabal al-Mokabber, southeast of the occupied Palestinian capital, Jerusalem, in the West Bank, and handed a demolition order of a Palestinian home.

The WAFA News Agency said the soldiers handed Ehab al-Hosseini an order for the demolition of his home.

It added that the order states that the family needs to destroy its property within 21 days or be forced to pay excessive fines and fees in addition to the demolition costs if the city carries the demolition out using its workers and equipment.

The Palestinian said he built his property on his land in 2017 and has been trying to prevent its demolition.

He added that he already received two fines of 45.000 Shekels each and paid them off. Yet, the city continues to deny him a construction permit.