Israel to Expel UNRWA from Jerusalem 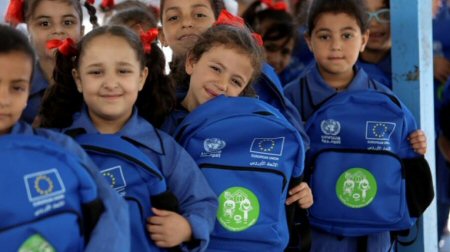 The Israeli mayor said he would stop the UN Agency from administering services to Shuafat refugee camp, claiming ‘there are no refugees in Jerusalem.’

The outgoing Israeli mayor of occupied Jerusalem Nir Barkat announced a plan to expel the United Nations Relief and Works Agency (UNRWA) from East Jerusalem on Israeli television on October 4, 2018.

“There are no refugees in Jerusalem, only residents. They will receive their services from the Jerusalem municipality alone, like all other residents,” Barkat said, according to the Times of Israel.

According to Barkat’s plan, seven schools run by UNRWA in Jerusalem’s Shuafat refugee camp will be closed at the end of the academic school year. The Israeli municipality will then force the 1,800 affected Palestinian students to matriculate into Israeli schools and seize the UNRWA buildings. Barkat also said Israeli authorities would eventually close UNRWA’s medical centers in Shuafat refugee camp.

UNRWA expressed concern about Barkat’s statement on October 5, 2018, emphasizing “The Agency is specifically mandated by the UN General Assembly to deliver protection and assistance to Palestine refugees in the occupied Palestinian territory, including East Jerusalem, pending a resolution of the conflict between Israelis and Palestinians.”

UNRWA was established in 1949 to serve Palestinian refugees of the 1948 Nakba – when Zionist militias expelled 750,000 Palestinians from their homes to conquer 78 percent of Historic Palestine. Today, the agency serves 5.4 million Palestinian refugees in the Middle East, including approximately 100,000 in East Jerusalem, where the agency provides services such as schools, medical clinics, food assistance, and sanitation systems.

The camp is the only Palestinian refugee camp within the Jerusalem borders and today consists of approximately 80,000 Palestinians. About half of the population in the camp is registered as refugees with the UN and about half maintain Jerusalem residency. Though residents pay taxes to the Israeli municipality, discriminatory Israeli policies have over time created conditions in Shuafat refugee camp that, in effect, transform the area into an open-air Israeli prison.

Barkat spoke of plans to remove UNRWA from Jerusalem in September after US President Donald Trump announced he would cut $300 million from UNRWA funding. At the time, Member of Executive Committee of the Palestinian Liberation Organization Hanan Ashrawi responded, “Israel is responsible for creating the Palestinian refugee problem, and it has no right to alter the mandate, duties and responsibilities of UNRWA as defined by the United Nations.” Indeed, Palestinians view Barkat’s announcement about UNRWA as a continuation of the aggressive Israeli policies enabled by the Trump administration.