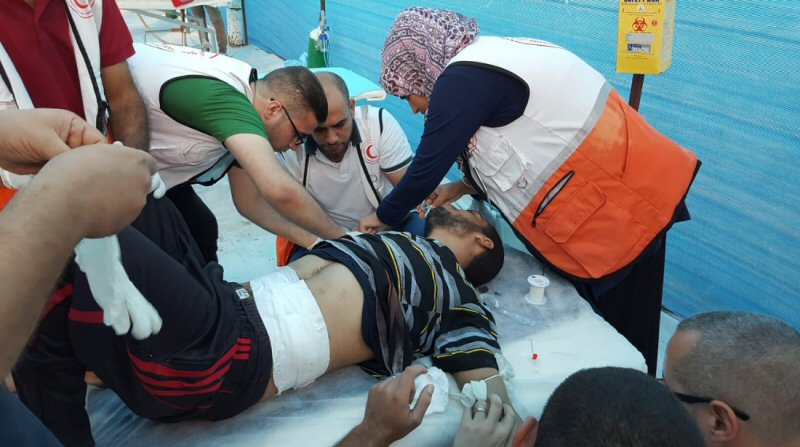 Israeli forces continued with systematic crimes, in the occupied Palestinian territory (oPt), for the week of 04 – 10 October, 2018.

In the Gaza Strip, on 05 October 2018, the Israeli forces killed 3 Palestinian civilians, including a child and a person with disability.  Fares al-Sersawi (12), from al-Shija’iyah, and Mahmoud Abu Sam’an (20), from al-Nussairat, were shot dead after being hit bullets to the chest while participating in the demonstration organized in eastern al-Zaytoun, east of Gaza City.  Moreover, Hussein al-Regeb (19), from Bani Suhailah, was killed after being with a bullet to the abdomen while he was 70-100 meters away from the border fence in eastern Khuza’ah, east of Khan Younis.  It should be mentioned that the latter killed was a person with Birth Defects and suffered cerebral atrophy in addition to other health problems in the abdomen.

As part of the use of lethal force against the peaceful protestors along the border fence during the reporting period, Israeli forces wounded 239 civilians, including 41 children, 3 women, 4 journalists and 6 paramedics.  Seven of them sustained serious wounds.

As part of targeting Palestinian fishermen in the Gaza Sea, the Israeli forces continued to escalate their attacks against the Palestinian fishermen, pointing out to the ongoing Israeli policy of targeting their livelihoods.  On 06 October 2018, the Israeli authorities decided to reduce the area allowed for fishing to 6 nautical miles along the Gaza Strip shores as part of the Israeli policy to restrict fishermen and targeted their livelihoods.  During the reporting period, the Israeli forces opened fire 4 times at the fishermen; 3 incidents in the north-western Beit Lahia and 1 off Rafah shore in the southern Gaza Strip.

As part of the Israeli airstrikes, on 05 October 2018, the Israeli helicopters targeted a border-control point belonging to al-Qassam Brigades in the southern Return encampment, east of Jabalia in the northern Gaza Strip and completely destroyed it.

On 07 October 2018, an Israeli drone launched a missile at a group of civilians who were in eastern al-Shokah village, east of Rafah City in the southern Gaza Strip.  However, no casualties were reported in both airstrikes.

In the West Bank, the Israeli forces during the reporting period wounded 6 Palestinian civilians, including a child.

As part of the Israeli house demolitions and notices, on 08 October 2018, Ayman Kawazbah self-demolished his house in Beit Hanina village, north of occupied Jerusalem to avoid paying a fine of NIS 40,000 to the Israeli municipality.  The house was built 10 years ago and the owner has recently attempted to obtain a building license from the competent authorties but in vain.  The Israeli municipality also imposed on him a construction fine of NIS 36,000.  The house sheltered 8 persons, including 6 children.

As part of demolition of houses and other civil objects, on 09 October 2018, the Israeli forces demolished 3 dwellings in al0-Halawah area in al-Masafer area, southeast of Yata in southern Hebron, and confiscated solar panels which were supplying the dwellings with electricity.  The dwellings belonged to the families of Jebril, Abu ‘Aram, ‘Alia Abu ‘Aram and Yaser Abu ‘Aram, and sheltered 19 individuals, including 13 children.

On 06 October 2018, 3 settlers from “Kedumim” settlement, east of Qalqiliyah, attacked a taxi car belonging to Rafi Taxi Company in Nablus.  The settlers threw a stone at the car; as a result, the stone hit the front window and broke it while the driver ran away.

On 10 October 2018, a group of settlers from “Shillo” settlement attacked Qaryout village, southeast of Nablus.  The settlers wrote hostile slogans against Arabs ad Muslims on the house walls of Mohammed Badawi and the New Village Mosque.  They also graffiti-sprayed the Star of David on the back of a car belonging to ‘Abdul Naser Badawi and slashed with sharp tools the tires of 8 cars.  They also broke windows of 4 houses and a car in ‘Orif village, south of the city in a similar attack.

Israeli forces continued its excessive use of lethal force against peaceful demonstration organized by Palestinian civilians in in the West Bank and Gaza Strip, and it was named as “The Great March of Return and Breaking Siege.” The demonstration was in protest against the U.S. President Donald Trump’s declaration to move the U.S. Embassy to it. According to PCHR fieldworkers’ observations, the border area witnessed large participation by Palestinian civilians as the Israeli forces continued to use upon highest military and political echelons excessive force against the peaceful demonstrators, though the demonstration were fully peaceful. The demonstration was as follows during the reporting period: