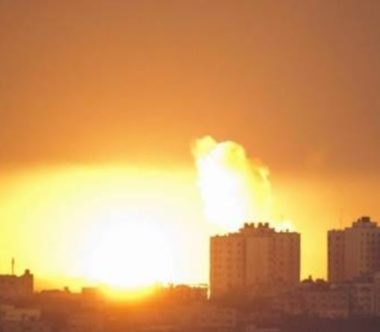 The Israeli Air Force fired, on Friday at dawn, many missiles into several Palestinian areas in the Gaza Strip, causing serious damage to homes and buildings, in addition to the area near Khan Younis Seaport.

The Palestinian News & Info Agency (WAFA) said Israel F16 fighter-jets fired at least three missiles into a building, east of the Zeitoun neighborhood, southeast of Gaza city, and leveled it.

It added that attack also led to property damage in many surrounding homes and structures, but did not lead to casualties.

The F16 jets also fired two missiles into a building in the Seaport of Khan Younis, in the southern part of the Gaza Strip, and destroyed it.

The army also fired many tank and artillery shells into Palestinian farmlands east of Rafah, in the southern part of the coastal region.

The Israeli army claimed that the missiles were fired in retaliation to a shell, which was reportedly fired from Gaza and landed in an area in Sderot.

In addition, Israeli army drones continuously flew at a law altitude over several parts of the Gaza, while F16 jets carried out various flights, starting at night and stopping on Friday morning.