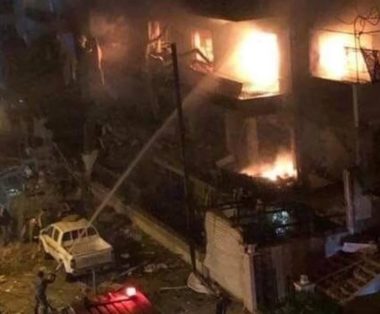 The Israeli Air Force carried out, on Tuesday at dawn, several airstrikes targeting a senior leader of the Palestinian Islamic Jihad Movement in the Syrian capital, Damascus, killing two, including his son, and injuring nine others, among them his grandson.

The al-Mayadeen News Agency has reported that the Israeli Air Force struck the home of Akram al-Ajjouri with two missiles.

It added that the missiles caused excessive damage to the home, and several surrounding buildings, killing Akram’s son, Moath al-‘Ajjouri, and wounding his granddaughter.

The strike also led to the death of Abdullah Yousef Hasan, and the injury of eight other civilians.

Israeli missiles also struck a building near the Lebanese Embassy, in the western district of the Syrian capital, where many diplomatic missions and Damascus University are located.

It is worth mentioning that the Israeli army also assassinated a senior Islamic Jihad leader in Gaza, identified as Baha’ Abu al-‘Ata, 42, who was killed along with his wife Asma’, while their siblings, Salim, Mohammad, Lian and Fatima az-’Zahra, and their neighbor, Hanan Hallas, were injured.