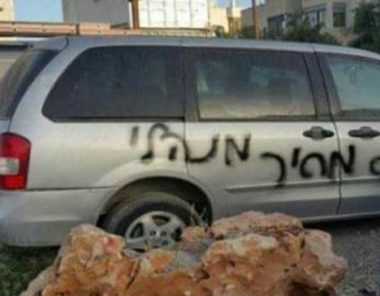 Ghassan Daghlas, a Palestinian official who monitors Israel’s illegal colonialist activities in northern West Bank, said the colonists punctured the tires of four cars, two tractors, and one bulldozer, in the eastern area of Orif.

Daghlas added that the assailants also wrote racist graffiti on walls, and the vehicles after puncturing their tires, before fleeing from the village.

The attack is the latest of a serious escalation carried out by the illegal colonists against the Palestinians and their lands, especially since the beginning of the olive harvest season, in several parts of the occupied West Bank.

In addition to cutting Palestinian trees and harvesting the olive orchards to steal the produce, the colonists also force the Palestinians out of their lands, and repeatedly flood the farmlands and orchards with wastewater.