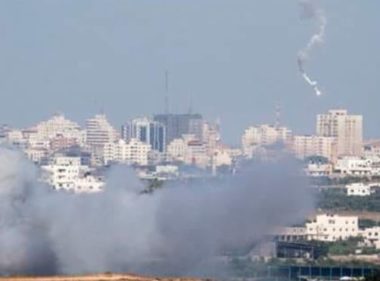 Hours after assassinating a senior leader of the Islamic Jihad, who was killed along with his wife, the Israeli army continued firing missiles into several areas of the coastal region, causing excessive property damage.

Media sources said the army fired a missile into an apartment in a residential building in Tal al-Hawa neighborhood, west of Gaza city, causing serious damage.

They added that the army also fired missiles into a site in Beit Lahia, in northern Gaza, in addition to several missiles into farmlands in central Gaza Strip, and east of Gaza city.

The latest escalation came shortly after Israel assassinated a senior leader of the Islamic Jihad, identified as Baha’ Abu al-‘Ata, 42, and his wife, Asma’ Abu all-Ata, in addition to wounding their siblings, Salim, Mohammad, Lian, and Fatima az-Zahra’, and their neighbor Hanan Hallas.

The Israeli missiles also caused damage to a school, run by the United Nations Relief and Works Agency (UNRWA) near the home of the assassinated Islamic Jihad leader, the Quds News Network has reported.

A state of emergency was declared in the Gaza Strip; all schools have been closed, and all hospitals declared readiness for a possible massive Israeli offensive on the coastal region, while the Israeli army closed border terminals.

It is worth mentioning that the Israel army fired missiles into the home of Akram al-Ajjouri, a senior leader of the Palestinian Islamic Jihad, in Syria, killing his son Moath, and wounding his granddaughter. The strike also led to the death of Abdullah Yousef Hasan, and the injury of eight other civilians.