Israeli Army Abducted 530 Palestinians In May 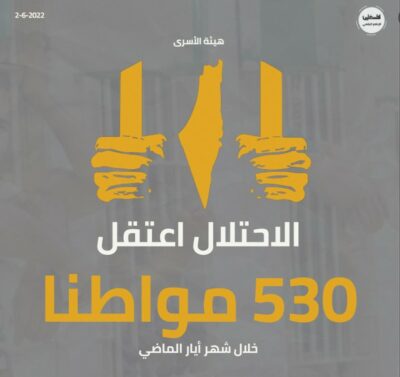 On Thursday, The Palestinian Detainees Committee reported that Israeli soldiers abducted 530 Palestinians in May of this year in several parts of the occupied West Bank.

The Committee said most abducted Palestinians were taken prisoner from occupied Jerusalem and its suburbs.

Most of the abducted Palestinians were taken prisoners during the violent Israeli military invasion and searches of homes, taking place every day at dawn.

The Committee added that the Israeli Authorities issued in May 157 arbitrary Administrative Detention orders, holding the Palestinians captive without charges or trial; eighty-two were news orders issued against the detainees for the first time, and seventy-five were orders renewing existing ones.

By the end of May 2022, the number of Palestinian political prisoners in Israeli prisons arrived at 4600, including thirty-one women, 172 children, and 682 Palestinians held under the arbitrary Administrative Detention orders.

551 Detainees are serving life terms, including many serving several life terms sentences; 214 detainees have been in prison for at least 20 years.