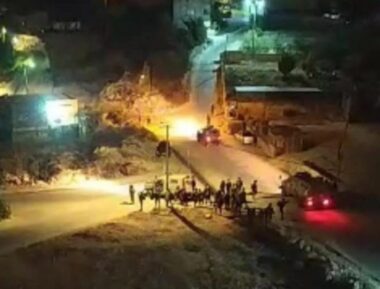 Israeli soldiers abducted, on Thursday at dawn, eleven Palestinians, including siblings, in addition to a father and his son, in Tubas, Jenin, Nablus, Bethlehem, and Hebron, in the occupied West Bank.

Kamal Bani Odah, the head of the Tubas office of the Palestinian Prisoners’ Society (PPS, in northeastern West Bank, said the soldiers invaded and ransacking homes before abducting Moayyad Mowaffaq Bahjat, 21, and his brother, Mos’ab, 19.

Many Palestinians protested the invasion, and hurled stones at the soldiers who fired live rounds and gas bombs.

Furthermore, the soldiers invaded Um ar-Reehan village, southwest of the northern West Bank city of Jenin, and installed many sudden roadblocks, before stopping and searching cars, and interrogated the Palestinians while inspecting their ID cards.

Local sources said the soldiers abducted a young man, who remained unidentified at the time of this report, after stopping him at a military roadblock.

The soldiers also invaded the village, searched several homes, and detained Bakr Zeid along with his brother Mohammad, in addition to Hilal Nader Mer’ey, for several hours before releasing them.

In Bethlehem, south of occupied Jerusalem in the West Bank, the soldiers invaded the Jabal al-Mawaleh area, in the center of the city, and abducted Adham Nasser Awwad, 28, after invading his home and ransacking it.

Also at dawn, the soldiers abducted a Palestinian man, identified as Hamza Halayqa, from Shiokh town, northeast of the southern West Bank city of Hebron from Hebron, in southern West Bank, only hours following his release from prison after he spent sixteen years behind bars.

In addition, the soldiers abducted Emad Yacoub Abu Turki and his son Yacoub, from their home in Hadab al-Fawwar village, southwest of Hebron, in addition to Abdullah Yousef Abu Shreiteh, from Yatta town, south of Hebron.

Furthermore, the soldiers abducted three Palestinians from their homes in Nablus, in northern West Bank.

They added that the soldiers also invaded Askar al-Jadeed refugee camp, in Nablus, and abducted Salloum Jouda, after storming his home and ransacking it.