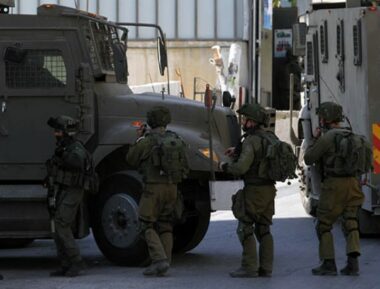 Israeli soldiers abducted, on Thursday at dawn, three Palestinians from their homes in Nablus, in northern West Bank.

They added that the soldiers also invaded Askar al-Jadeed refugee camp, in Nablus, and abducted Salloum Jouda, after storming his home and ransacking it.

It is worth mentioning that Beita has been witnessing daily invasions, violent searches of homes, and abductions by the soldiers due to ongoing protests against the illegal takeover of Sbeih Mountain, and the installation of the Avitar colonialist outpost in May of this year.

During these protests, the soldiers killed several Palestinians, including Emad Ali Dweikat, 37, who was shot on August 7th; hundreds of Palestinians have been injured and dozens were abducted and imprisoned by the army.

Also at dawn, a Palestinian man, identified as Hamza Halayqa, from Shiokh town, northeast of the southern West Bank city of Hebron from Hebron, in southern West Bank, only hours following his release from prison after he spent sixteen years behind bars.