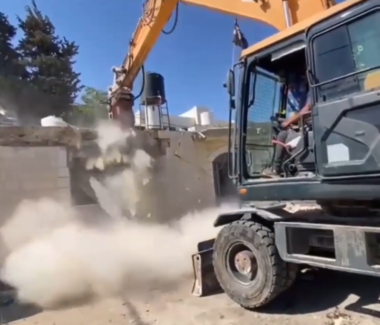 Israeli soldiers forced Thursday, five Palestinians to demolish their homes in Beit Hanina, north of the occupied Palestinian capital, Jerusalem, in the West Bank, allegedly for being built without a permit.

The Palestinians reside in the al-Ashqariyya neighborhood in Beit Hanina and had to demolish their homes to avoid paying the excessively high fines and fees if the City Council in Jerusalem demolishes the property using its workers and equipment.

The properties are owned by Abdullah Khader, along with his sons and their families, who were all rendered homeless.

Trying to save its homes, the family filed several appeals with Israeli courts, but the court ruled in favor of illegal colonialist settlers, who alleged owning the lands where the homes were built, since the year 1962, before Israeli occupied East Jerusalem in 1967.

On Wednesday, the Palestinian Ministry of Jerusalem Affairs stated that Israel demolished more than 81 Palestinian-owned buildings in the occupied capital, since the beginning of this year.

It added that Israel is still trying to force hundreds of Palestinians out of their homes, where their families have lived for many decades in Beit Hanina, Sheikh Jarrah, Silwan, and other parts of occupied Jerusalem, to replace them with colonialist settlers.

On Tuesday, the army demolished a Palestinian home in the Be’er Ayyoub area in Silwan, south of the Al-Aqsa Mosque.