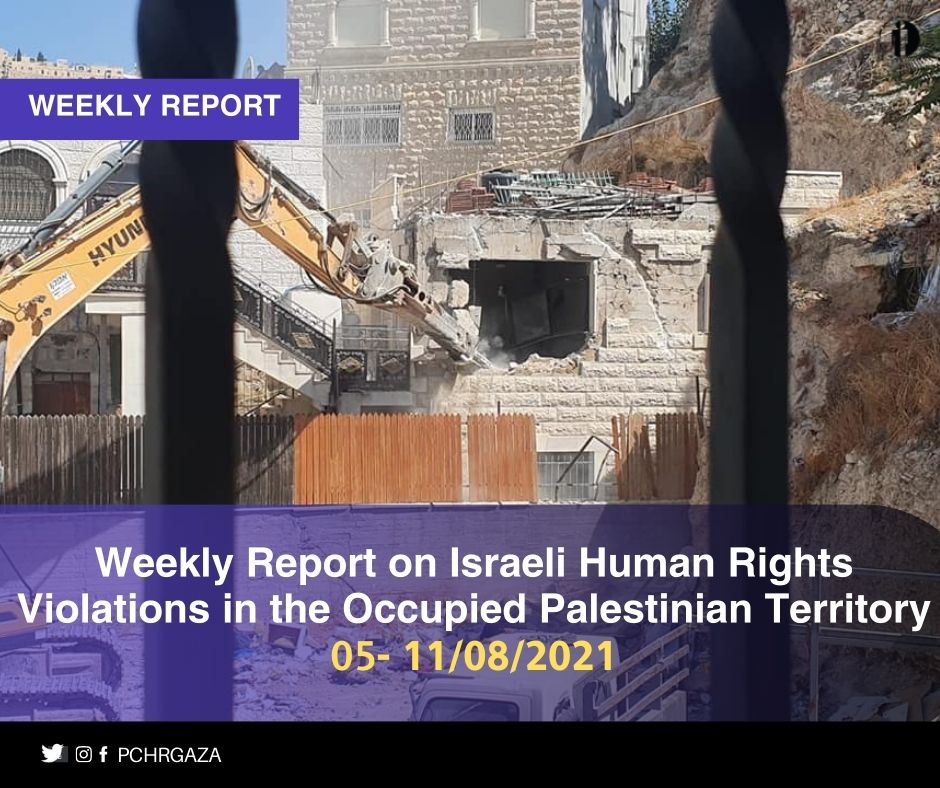 Israeli forces continued to commit crimes and multi-layered violations against Palestinian civilians and their properties, including raids into Palestinian cities that are characterized with excessive use of force, assault, abuse, and attacks on civilians, turning the West Bank into isolated blocks of land. Israeli settlement expansion on Palestinian properties and land continued. Meanwhile, the Gaza Strip enters its 15th year under closure, exacerbating the humanitarian hardships across the territory.

Israeli soldiers killed a Palestinian civilian and wounded 3 others in the West Bank: a journalist, a child, and a person with disability. Additionally, another Palestinian civilian died of wounds he sustained in an army attack in Jenin. On 6 August 2021, soldiers killed 37-year-old Imad Ali Mahmoud Dweikat with a bullet in the chest; the victim was not involved in the clashes in Beita, as he was standing by an olive tree at least 150 meters from the area, and he did not pose any threat -nor were there any event that did- to soldiers. A child, and a journalist, were also wounded during attacks on the peaceful protest against settlement expansion in Beita, southeastern Nablus. Also, Deyaa Yusuf Yassin Kmail (24) died on 11 August 2021 of wounds he sustained during an army raid into Jenin. Additionally, a person with a disability was wounded as a tear gas canister hit him during an army raid into Dayr al-Ghusun, northern Tulkarm; they arrested him after his injury, and later released him.

In the Gaza Strip, the military launched an air strike that caused damage to an agricultural land in Beit Hanoun. Additionally, two IOF shootings at fishing boats were reported in northern Gaza.

Israeli forces carried out 143 incursions into the West Bank, including occupied East Jerusalem. Those incursions included raids of civilian houses and shootings, enticing fear among civilians, and attacking many of them. During this week’s incursions, 75 Palestinians were arrested, including 10 children.

Hebron: two under-construction houses demolished; cease-construction notice served against a house in Si’ir; also in Yatta, the army demolished a water well, a room, and a barracks.

Ramallah: two residential tents and sheep barns dismantled and confiscated in Ramun; a barracks (used as shelter) was demolished on Ras al-Mo’rajat – the main road connecting Jericho and Ramallah.

Occupied East Jerusalem: Construction of settlement project initiated on the grounds of Jerusalem International Airport in

Hebron: assault on Palestinian civilians in the Old City

This week, Israeli occupation authorities continued to ban the entry of dozens of goods, including construction materials, in collective punishment measures against the Gaza Strip as the Israeli closure imposed on the territory entered its 15th year, without an end in sight that would fulfil Palestinians’ right to enjoy their economic, social, and cultural rights. Despite the Israeli occupation’s announcement of a series of relief measures on both Karm Abu-Salem and Beit Hanoun crossing, severe restrictions remain in place as several types of products and raw materials are banned entry.

On Monday, 9 August 2021, the Presidential Committee for coordinating the entry of goods to the Gaza Strip via Karm Abu-Salem crossing announced that the Israeli occupation reversed its decision to allow the entry of certain goods to Gaza. According to the Committee, the goods in subject include 34 types, mostly cell phones, laptops/computers, and connection/internet materials.

Meanwhile, occupation authorities continued to divide the West Bank into separate cantons with key roads blocked by the Israeli occupation since the 2000 Second Intifada -still closed to this date- and with temporary and permanent checkpoints, where civilian movement is restricted, and they are subject to arrest, especially at al-Karama border crossing, alongside the Palestinian-Jordanian border.

Zaki al-Batmah, Member of Battir Municipality, said that Israeli forces moved into eastern Battir village and levelled a road in Karam Hadidone area. He added that the villagers attempted to confront the army and prevent their vehicles from levelling the road, but clashes broke out; during which the army fired teargas and sound bombs heavily. As a result, tens of civilians suffocated due to teargas inhalation. Al-Batmah said that the army assaulted him and Said Abu Harthiyah, the municipality’s employee, causing them bruises and wounds.

The settlers have recently targeted the village by establishing mobile houses and tents to seize it and building a new settlement outpost; however, the villagers could confront them and removed the tents.

Shadi ‘Odah, the brother of the houses’ owners, said that his 2 brothers built their houses 4 years ago after obtaining a “construction line” license from the Israeli municipality in prelude to obtain the needed legal licenses. ‘Odah added that his 2 brothers received an order to demolish the 2 houses, so the family headed to the Israeli courts, but the judge refused to postpone or freeze the decision. ‘Odah said that the family was surprised with the army’s raiding of the houses in the morning and giving the residents half an hour to evacuate and empty the contents before the demolition. ‘Odah said that the construction of the 2 houses cost them more than 700,000 shekels in addition to 150,000 shekels his brothers paid for the engineers for the licensing procedures. ‘Odah added that the first floor was of 100 sqms where his brother ‘Ali and his wife and 2 kids live while the second floor of 95 sqms shelter his mother and his 2 brothers.

Head of the village council, Khader al-A’araj, said that IOF accompanied with a bulldozer moved into ‘Ein Jweizah area after moving into al-Natouf area from the eastern side of the village via a gate in the annexation wall. They headed to a poultry farm that included a barrack and an agricultural room belonging to Shadi Mousa ‘Abdel Sheikh from Beit Safafa village, south of occupied Jerusalem, and demolished it while the animals ran away. As a result, many of the animals died due to the demolition and the hot weather. Al-A’raj added that the army, 2 weeks ago notified the farm’s owner of an administrative demolition decision. The demolition losses exceeded 400,000 shekels, i.e. USD 121,000, especially that the farm had 300 poultry birds from different types.

It should be noted that the demolition was allegedly for unlicensed construction while regarding the military order, the Israeli authorities referred when issuing this notice to Article (4) of the military order no. (1797) that targets the new buildings and facilities, which were resided less than a month ago, as well as the buildings that have been under-construction for 6 months.

This decision deprives citizen’s right to legally defend his facility or dwelling, and the Israeli authorities started using this order and obtained powers and legal cover from the Israeli Supreme Court, which rejected all petitions and challenges that were applied by human rights organizations to defend the Palestinian houses in addition to authorizing the Civil Administration to implement this decision.

The army, deployed in the area while the vehicles carried out the following demolitions:

1. A 30-sqm agricultural room belonging to Fo’ad Fadel al-‘Amour who received on 27 July 2021 a notice within the 1797 military decision that givens citizens 96 hours to submit their papers needed for licensing the facility.
2. A 200-sqm barrack of tinplate sheltering 400 sheep belonging to Akram Sari Mohammed Abu Sabha.

The Israeli authorities demolished Abu Sabha’s facility without a prior warning as they previously demolished a dwelling, tents and barrack for the same person on 18 October 2020.

Kherbet al-Fakhit is part of Kherab Masafer Yatta village with a population of about 80 people, who depend on agriculture and livestock. Al-Fakhit is bordered to the east by Kherbet al-Majaz, to the west by Kherbet Shaab al-Butm, to the north by Kherbet al-Tabban, and to the south by the Green Line and the Annexation Wall.

Head of the Jab’a village council said that the settlers raided a plot of land belonging to Ref’at Hasan al-Tous in Shaqif al-Dab’a area, southeast of the village, and cut tens of olive trees planted 60 years ago. It should be noted that the army prevent Jab’a village’s farmers from entering their agricultural lands of 40 dunums, which were isolated by the annexation wall in 2005. The army stationed at al-Jab’a crossing and known as “Hala Border Crossing,” which isolates the lands occupied in 1948 from the lands occupied in 1967, allows the lands’ owners from the village to enter their lands twice a year only according to the security coordination. It is once for plowing the land and trimming the trees and the other for harvesting the fruits after the season ends and the fruits are seized by the settlers of “Jab’out” and “Beit ‘Ayem” settlements.

Ahmed Ghazal, Kisan Village Council’s deputy chief, said to PCHR’s fieldworker that the settlers moved into an agricultural land rented by Hussein ‘Abdullah al-‘Abyyat and his sons in the western side of the village. Ghazal said that the army prevented the owner of the land and his sons from entering the land where the settlers were levelling it, planting pine and olive trees in large numbers, and establishing electricity poles. Ghazal added that fistfights occurred between settlers and villagers, who tried to prevent settlers from seizing the land, but the army increased their numbers in the area and detained the owner of the land ‘Abyyat and his sons for several hours.

It is noteworthy that Kisan village has been under large-scale settlers’ attacks, including the seizure of its lands in favor of expanding the existing settlements, assaults on the owners of agricultural lands there, preventing them from reaching their lands, and causing damage to their agricultural crops.