Soldiers Demolish A Home In Silwan 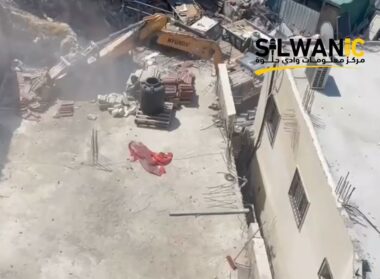 The Wadi Hilweh Information Center In Silwan (Silwanic) stated that the home is owned by two siblings, identified as Ramah and Ali Odah.

It added that the home is in the Be’er Ayyoub area in Silwan and that the soldiers closed the entire area and prevented the Palestinians from entering or leaving it.

The soldiers then forced the family to remove their furniture and belongings from the property before demolishing it, rendering twelve Palestinians homeless.

Ali said that it took the family many years to save some money to build their home to provide stability and decent shelter to the family and added that the family has also been paying various high fines and fees to the City Council, but it kept it refusing to grant them a permit for the property.

“These violations are completely politically and demographically motivated,” he told Silwanic, “They don’t want us here; this is our land, but they want to remove the Palestinians to replace them with illegal colonizers.”